Bangkok to Buriram by overnight Train

Hua Lampong by Night
Cambodia Excursion Part I
I have not traveled overnight on Thai railways for about 7 years and it was not my intention to do an overnight on this trip. Unfortunately, the only daytime tickets I could get were 3rd class - not recommended - often bare metal seats which over a 6 or 7 hour trip can leave you sore in back and backside.

However, I recorded a first: I booked the ticket on-line via the SRT website. The SRT has promoted on-line booking more than once in the past without being able to provide a reliable service but I readily admit that this time it was easy, efficient, and only entailed a modest surcharge for the service. I could not get the daytime train I wanted or a lower berth on the sleeper train, but that was my fault: I had not realised how busy the Bangkok - Ubon Ratchathani line is these days and only booked my ticket the day before I traveled.

The friend I was visiting, who lives in Krasang, near Buriram, tells me that the twin reasons for the new popularity of the district are: the Buri Ram Stadium ( i-mobile Stadium), a 32,600 seat football stadium constructed according to FIFA standards and home to Buriram united; and Chang International Motor Racing Circuit - the first FIA Grade 1 and FIM Grade A circuit in Thailand.

One of the pleasures of overnight travel from Hua Lamphong station used to be a pre-travel meal and a beer at the little restaurant upstairs on the right as you entered the station - no longer there, possibly because of the recent ban on alcohol on trains and stations. You can still get a burger, or a do-nut, and as much fizzy sugary drink as you like elsewhere in the station but I prefer not to, though the Thai food in the fast food court is cheap and good. 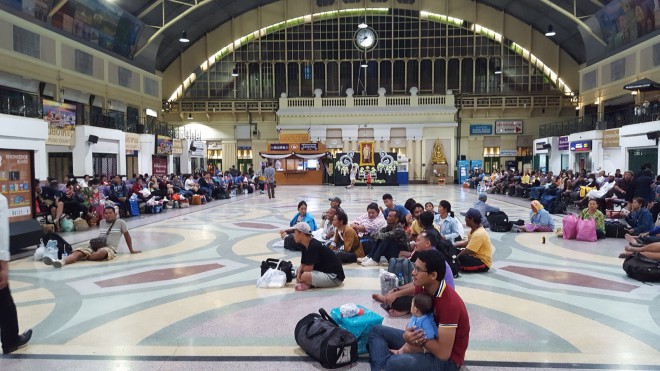 Inside Hua Lampong Station
However, I had noticed previously that opposite Hua Lamphong is a little row of shops and cafes, notably Hong Kong Noodles and @Siam where you can certainly get a beer and also an excellent view of the elegant facade of Thailand's oldest Railway Station (photo at the beginning of this article). So, a bowl of noodles and a large beer later, I was suitably prepared for my trip 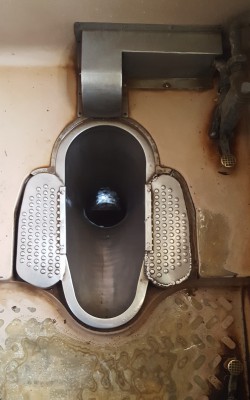 Squat Loo
Looking at my old photos, I note that the condition of the carriages has not improved over the years, though I believe new rolling stock has been ordered with some already in operation. The frame holding the curtain around my berth was held to the ceiling by Duct Tape (or is it Duck Tape? - never worked that one out). Also my knees are not as bendy as they used to be so climbing the high steps from the platform to the train is not so easy and most of the loos seem to be still of the squat variety, with waste disposal straight onto the track below.

I believe that the new rolling stock has western style facilities.

So how was the trip? Not bad really, though you get thrown about more in the upper berths and, when stopped, the smell of diesel is not pleasant. The main problem is that you cannot look out of the train at stops to find out where you are. Surprisingly perhaps, the train I caught was remarkably punctual, so that I was able to get a good idea of where I was by consulting the timetable (on thailandbytrain.com) on my phone and by looking at my watch.

My destination station of Krasang, however, was scheduled for 4.44 am so I did not get much sleep, fearing that I might miss my stop: in fact, one of the staff appeared about 30 minutes before we got to Buri Ram and announced in a very quiet voice where we were and, noting that I appeared to be ready for exit, asked my destination and confirmed that it was the next stop after Buri Ram.

So there I was, 4.50 in the morning, at Krasang Station already very busy with mainly Thai travelers waiting for trains; the little coffee stall at the entrance to the station parade was already open and all around was the buzz of early morning motorcycle taxis plying their trade. My pal, however, was not there to meet me but a quick phone call sorted that out; breakfast at his place and then train and bus to the Cambodia border for Cambodia Excursion Part II 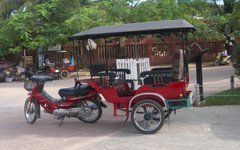 A quick flip around North East Thailand and Western Cambodia by train, bus and boat, taking in Siem reap and BattambangCambodia's New Railways