Many Thais of Chinese background practice occasional vegetarianism, often once a week, and many practice total abstinence from beef; once a year Phuket, Bangkok's Chinatown and Samut Prakhan and many other towns and cities in Thailand celebrate the 9 day Chinese Vegetarian Festival.

its object is personal and communal purification. Participants abstain from eating meat and also, hopefully, from sex and alcohol. Utensils used for preparing food should not have been used in the preparation of meat.

This is a lunar festival, so the dates vary from year to year, in 2018 the dates being October 8th to 17th. In most food courts you will food stalls decked out in yellow flags signifying 'Je' - vegetarian food: even the soft drink and coffee stalls sport the flags though I doubt if they change their menu at all.

Temporarily Vegetarian Food Stall
I look forward to this period - the variety of dishes you can make with tofu, nuts, pulses and vegetables is quite surprising. In fact I often wish that more restaurants and food stalls in Thailand would serve these dishes all year. The main one I am aware of is in the food court of Robinson's Rachada (Bangkok) and is, I believe, owned by Khun Mechai, proprietor of the "Cabbages and Condoms" restaurants. There is also a stall in the food court at Paradise Park, Srinakharin Road, also in Bangkok, which flies yellow banners all year round.

The most famous, and probably original, center for the festival is Phuket where it is also known as the Nine Emperor Gods Festival. It probably dates from the mid 19th Century and in modern times is celebrated with ceremonies and processions, fire-walking, self-mutilation and an abundance of fire-crackers.

For a full schedule of this year's events, check out:
phuket.com 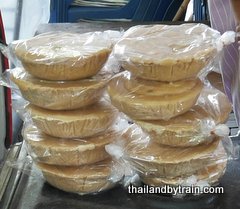 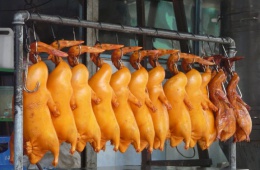 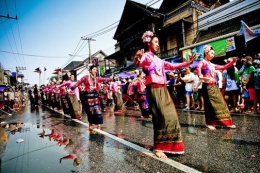 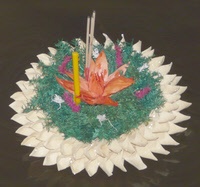