My pal Dannie and I had a few spare days and we decided to do a big loop through Thailand and North East Cambodia. We were also looking vaguely for somewhere in Cambodia that might be a suitable location to establish a new business some time in the future: two places I thought might be suitable were Siem Reap, famous for the ruins of Angkor Wat nearby and Battambang, both of which I have visited in the past.

I had travelled overnight from Bangkok and met Dannie in Krasang for breakfast. Krasang is a small market town in Buriram province and at some times of day, such as 4.45 in the morning when I arrived, the railway station seems to be the busiest place in town.

I rather like Krasang station, especially the old cautionary posters placed around the platform - caution being necessary as the tracks are un-fenced and a footpath crosses them to link the two sides of town. I hope the itinerant food vendors take note of the image bottom right: 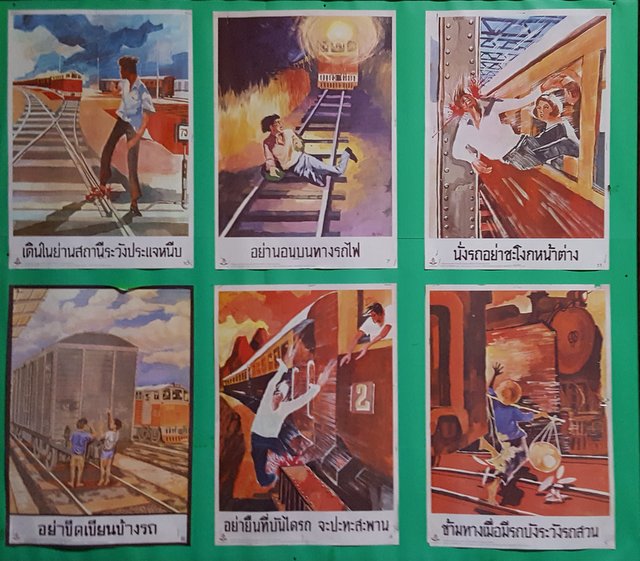 The old manual signalling system is also located on the station with a brass station bell and the stands for the token system - still used for single track railways in rural Thailand. The 'token' looks like an unstrung tennis racket and acts as a passport for trains entering the next section of track - without the token, the train is not allowed to move on. It is the duty of the stationmaster to hang up an available token (see below) to be picked up by an out-going train and collect the incoming tokens. It is also his duty to wave the green flag signalling trains to leave the station. 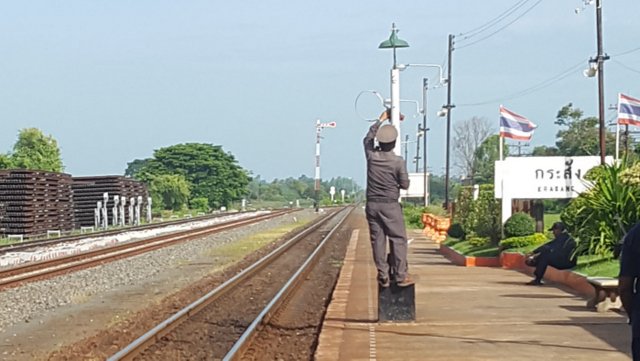 Placing The Token
Rural stations in Thailand tend to be pleasantly, and sometimes whimsically, decorated, with small water features, Bonsai, pot plants, old and new photos. Stray dogs wander here and there and sometimes cross the tracks looking for greener pastures on the other side of town. I also noticed that Krasang carries a considerable stock of spare track, but whether this is for running repairs or for track doubling in the future, I could not say. 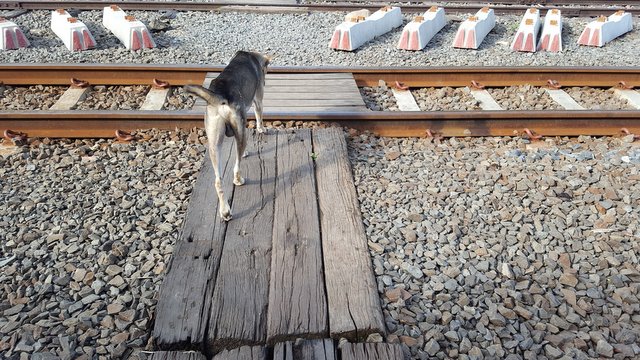 In search of greener pastures
We took an early Eastern Line train from Krasang to Surin at a cost of 5 baht each, third class, standing room only for the 20 minute journey, trying to avoid crushing the Fruit & Veg for sale. The old trains do not have restaurant carriages so local 'entrepreneurs' wander through the carriages carrying fruit, veg, fried food in polystyrene containers, grilled chicken, and soft drinks - sadly beer is no longer available. 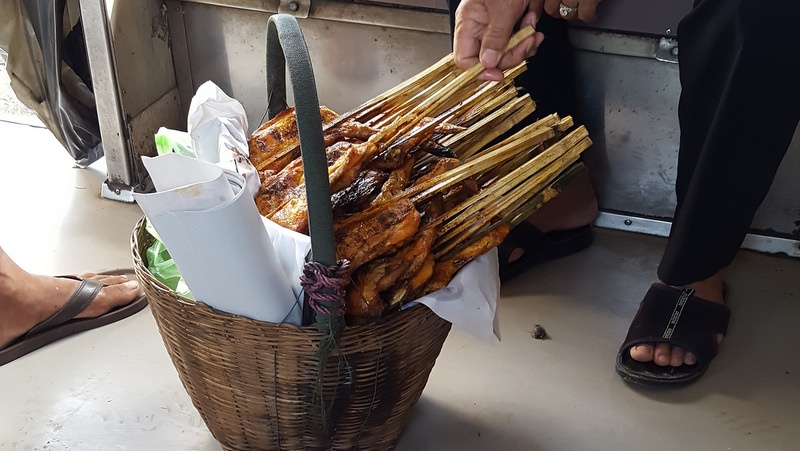 Grilled Chicken on the train
From Surin we took a minibus to the border town of Chom Chong which has a quite large market. Anywhere near the borders of Thailand attracts military attention and we were stopped at two check points though they only questioned the driver and did not seem interested in white foreigners. Most of the other passengers appeared to be Khmer and talked incessantly and loudly for the whole journey of around 75 minutes. Crossing the border was quick and easy though on the Cambodia side they would not accept USD but only Thai Baht - at their own inflated exchange rate - so it goes.

Cambodia
We found a taxi to take us to Siem Reap for $25 and were quickly on our way. In the area near the Thai border I noticed many roadside stores selling goods, possibly imported from Thailand, or possible going the other way - bicycles seemed to be a favorite. In the little wayside stores, rather surprisingly, only Thai beer was advertised. We did not see adverts for Angkor, Anchor or Cambodia beer until we were well on the way to Siem Reap.

The road to Siem Reap is well-maintained and we were in the tourist area of town by around 2.30pm, having made a deviation to the more rural outskirts of town (red dirt roads only) to drop off two young Cambodian women who had shared the taxi - how much they paid we had no clue as they used Cambodian Riel. It did not look like $25 dollars worth though (1USD = approx 4,000 Riel).

Siem Reap
Siem Reap is famous for the ruins of Angkor Wat a few miles north of the town, and of which I will write in a separate article. In this brief visit, we mainly experienced the ambiance of the place, the food and wine - both of which were excellent, and the tuktuk drivers, who were persistent. I do admire the tuktuks though, rather heavier than the Thai variety (possibly solid teak?).

Tuktuk Siem Reap style
But really the tuktuk drivers can be quite wearisome. If you sit in an open-air restaurant, too near the street, they will park outside and attempt to indulge in conversation, check out whether you want a trip to the Tonle Sap, Angkor Wat or a trip round town (you can walk most of it), or if you want a hotel (we had back-packs with us), a lady, a fish massage etc., etc.

For our dinner that one evening that we stayed in Siem Reap, we went to a place where tuktuks cannot go. It's called The Lane, off Street 11 (pub Street) and only about 6 feet wide. The restaurant is called 'For Life' and I remembered it from a visit 2 years ago. The restaurant is colonial French style, the food excellent and cheap, the wine very palatable. We had 2 bottles of Bordeaux Sauvignon Blanc (Louis Eschenaur) with our meal at 12$ a bottle.


For Life Restaurant - it got busy an hour later
Much as I love Thailand, the price of wine drives me crazy - you can drink yourself to death on Lao Khao for 50-60 Baht a bottle (less than 2$), but a palatable wine is going to cost $25 dollars upwards in a bottle store - more than twice the price you would pay in UK. We got there early so the photo shows an empty restaurant. 2 hours later it was packed, mainly with Khmer families - usually a good sign.

The Boat to Battambang
A few years ago, an American friend and I tried to catch the boat from Siem Reap to Phnom Penh, through the Tonle Sap - "sorry not running" - so we caught an incredibly dusty bus instead, with road works most of the way. This time Dan and I wanted to catch a boat to Battambang (two thirds of the way from Phnom Penh to the Thai border at Aranya Phrathet). Success! - and not a bad trip, but rather longer than we wanted and not very comfortable.

As we waited for our taxi to the Tonle Sap, I noticed a very striking looking building almost opposite our hotel. It looked like a modern architect's homage to the builders of Angkor Wat, even to the long corridor through the center, with a mirror placed at the far end, reflecting enough light to suggest that the corridor continued behind it.

Homage to the architects of Angkor Wat
The story continues in Cambodia Excursion P III: the Boat to Battambang 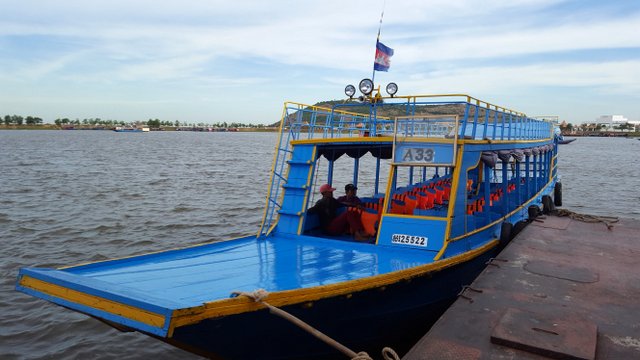 Not our boat - but much prettier

RELATED content
Bangkok to Buriram by overnight Train
Cambodia Excursion Part I: an overnight trip from Bangkok to Krasang (Buriram district) on the old rolling stock - not the most comfortable.Cambodia's New Railways