The Borders of Thailand

Thailand borders on some wild and dangerous places and travel in these areas can be hazardous. On some parts of the Cambodia and Laos borders there is a high risk of mosquito-borne infection, and a significant danger from land mines and unexploded munitions left over from the Vietnam and Cambodian wars.

Though Burma is somewhat more peaceful than it has been in recent years, it is estimated (see article on cntv.com, May 2013) that around 70% of the Burmese side of the border is mined, either by the Burmese military or by one or other of the anti-government factions, and in recent times, over 3,000 people have been killed or injured in land-mine explosions.

Malaria and Dengue Fever are endemic in many areas bordering Burma from Mae Sai in the north to Ranong in the south, where Burma and Thailand meet on the Andaman Sea.

When I first visited Thailand, the southern border (with Malaysia) was a pleasant and safe area for travellers. Sadly this is no longer the case; since January 2004, the far southern provinces of Yala, Pattani and Narathiwat have suffered from separatist violence, with regular bombings and shootings. These provinces are largely Muslim in population, with historical links to Malaysia and, though many local people consider themselves to be Thai, others would prefer independence from Thailand.

Many western embassies, including the British, have warned against all but essential travel to these provinces and to neighboring Songkhla province. Please check with the British or other embassies for latest travel advice.

Though there have been relatively few incidents in Songkhla province, on 3 of April 2005 three bombs exploded in this area, one at Had Yai International Airport, one at a hotel and one in a shopping center. Two people were killed and at least 15 seriously injured.

On August 2, 2008 7 bombs exploded in Songkhla and Had Yai, with at least 4 people injured.

Most recently (Dec 23, 2013) 27 people were injured in a number of explosions in the Sadao district of Songkhla

The Thai Railway system connects to Malaysian Railways at Padang Besar in Songkhla Province, and at Sungai Kholok in Narathiwat. Unfortunately, terrorist activity has curtailed tourism to these areas.

The Westerly route, which crosses the border at Padang Besar, has always been the more popular for western tourists, as it connects through to Penang and Kuala Lumpur, and eventually to Singapore. The Thai and Malaysian immigration points are at the appropriate ends of the station in Padang Besar, though these days it is necessary to change to a Malaysian train to continue the journey. Most western nationals get a 90 day visa on arrival in Malaysia.

It is also possible to cross into Malaysia by sea from Satun: take a minibus from Had Yai (around 100 Baht) to Thammalung Pier, Satun, and then a ferry to Langkawi. Last time I was there, ferries ran at 9 a.m., 1 p.m., and 4 p.m: check first in Had Yai. A mini-bus stand, opposite the railway station, should have current information.

For road travellers, the nearest crossing to Had Yai is at Sadao, about 1 hour from the city. Buses and mini-buses go to many Malaysian destinations, and at very reasonable prices. Every Had Yai travel agent advertises such services.

Probably the most popular Malaysian destination from Had Yai is Penang Island, one of the old British settlements in Malaysia, with many buildings and street names dating from the Colonial era.

Penang Ferry Terminal
The train for Penang stops at Butterworth railway station, a short walk from the ferry terminal; travellers usually enter Penang on the ferry, seen to the right with the Queen Victoria Clock Tower in the background.

Penang is popular with backpackers going to or from Thailand. Chulia St, Georgetown, just up the hill from the ferry, is lined with backpacker hotels and restaurants. The better quality hotels are also reasonably priced.

There are border crossings to Cambodia at Aranya Prathet at the end of the Eastern Railway line, and at Khlong Yai at the extreme south-eastern tip of Trad province. Visas can be obtained for a 1000 Baht (officially $20.00) at the border or from the embassy in Bangkok. It is also available as an E-Visa for $28, but make sure you use the government site. Several other operators offer the same visa but for double the price.

The Aranya Prathet crossing tends to be very busy with Thais trying to visit the Casinos located just over the border, and foreigners taking an easy route to get a new 30 day Thailand visa. The immigration area, both sides of the border, is patrolled by Cambodian touts who claim to have a friendly relationship with Cambodian immigration.

It is, nevertheless, a popular route to Angkor Wat for foreign tourists: mini buses run everyday from Bangkok. From the Cambodian side of the border it is possible to hire a taxi to the capital Phnom Penh or to Siem Reap (for Angkor Wat), quite cheaply - as long as you avoid the taxis near the border. The Casinos operate also as hotels (600-800 Baht per room, per night).

There is also a train service from Bangkok (third class only), which will soon cross the border at Aranya Phrathet. There is already a rail connection between the border and Battambang and soon it will be possible to continue all the way to Phnom Penh by rail, the last re-connection in the great railway from Phnom Penh, through Thailand and Malaysia to Singapore.

In 2005 a new border crossing opened at Bahn Laem, south of Aranya Phrathet. It is mainly used by visitors to Thailand, crossing the border to get an extra 30 day Thailand visa, though there is also a small casino at the hotel between the two borders. Mini bus services operate from Bangkok and Pattaya. I am not aware of links from Bahn Laem on into Cambodia.

Thai Government has changed the rules on visa-on-arrival. Visitors arriving at land borders are only allowed to stay 15 days (30 days at an airport). See Visa section for more details.

Day trips to Burmese border towns are possible at several places, including:

the most northerly point in Thailand: from Mae Sai you can walk over a small bridge to the Burmese town of Tachilek, though, as you can see from the photo, you could almost jump from one side of the river to the other. A day pass costs about 250 Baht. The town is not very exciting and restaurant prices have risen to take advantage of the tourist influx.

There is a large open market just over the border where you can buy cheap goods mainly from China. Bootleg CD's and DVD's are much in evidence, though recently Thai Immigration has taken to seizing such goods and fining their possessors. I have seen foreigners at the Thailand immigration queue dumping all their bootleg stuff, or just removing the discs and dumping the packaging - someone obviously tipped them off. It might have been easier to throw the package across the river to a waiting accomplice! 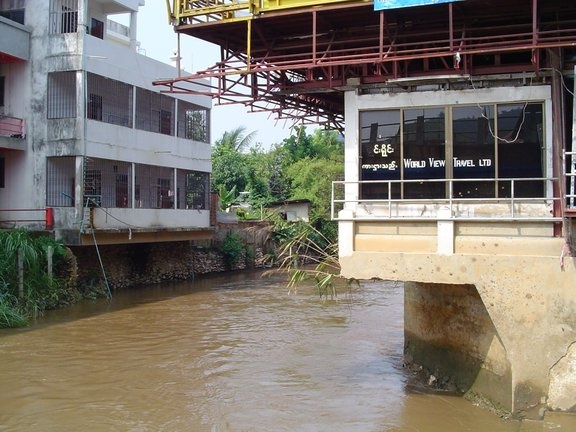 For background reading on the Northern and Western border areas, I highly recommend Dr. Christian Goodden's books: Three Pagodas Pass and Around Lan-Na.

where western Thailand meets the Andaman sea: ferries connect with the Burmese town of Khaothung (Victoria). A one day pass costs around 250 Baht, I believe.

it is sometimes possible to cross the border at the Three Pagodas Pass - but check first to make sure that it is open. 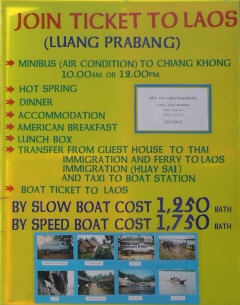 Slow Boat to Laos
A new railway line opened in 2009, linking the Thai Railway system with Bahn Thanaleng, just across the Mekhong river in Laos. Later the line should extend to Vientiane.

The main land route (which also carries the new railway line) is the Friendship Bridge at Nong Khai, about 1 km from the end of the North-Eastern Railway line. These days, buses go all the way from Nong Khai to Vientiane, about 20 km inside Laos. Visas are easily available from the Laos side of the border for $30.00 US or so.

Touts (and tuk tuk drivers) will try to persuade you to use their favorite travel agent to "facilitate" the visa - for an extra $20.00 - pay no heed: visa application takes only a few minutes at the border, so doing it yourself saves time and money.

From Chiang Mai, you can take a mini bus and boat to Luang Prabang (see poster above), the beautiful historic center of the northern Tai civilisation, but this is not such an easy route and why all those baths? 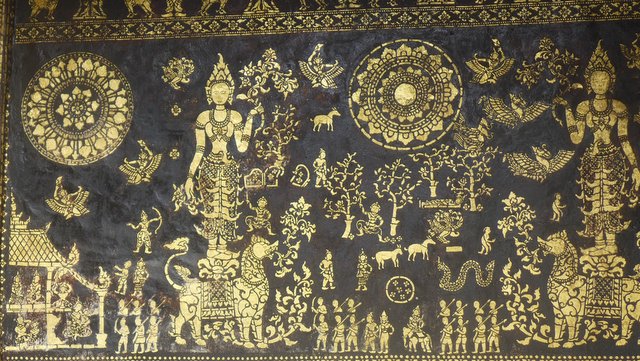 It is also possible to cross from Ubon Ratchathani to Pak Se in Laos; the border crossing is at Chong Mek, and a Laos visa-on-arrival can be obtained there for 1500 baht.
Share this page:

RELATED content
Useful Links
Airlines, bus stations, embassies in Bangkok.Sources
Historical and other sources for many of the pages on Thailand By TrainBikes On Trains

The late, and much lamented, Dan White, travel writer and photo-journalist, explains how to get your bike on a Thai train. Thai Railway History