Kanchanaburi and the River Kwai

The time-honored invasion route from Burma into the central plains of Thailand, and in the reverse direction of course, is via the Three Pagodas Pass and the valley of the Kwae Noi known in English (incorrectly) as the River Kwai. During World War II it was also the course of the Thai Burma Railway. A brief history of the area is given below.

The valley stretches approximately 190km north west from Kanchanaburi to the Burmese border at Three Pagodas Pass, with the mountainous Sai Yok, Erawan and Khao Laem national parks to the east and the 6000 ft Bilauktaung mountain range of Burma to the west.

There are also many resorts along the river, some, such as the Bahn Rim Kwae Jungle House and River Kwai Cabin, in quite spectacular locations.

Kanchanaburi lies about 120 km North West of Bangkok at the confluence of the Kwae Noi and Kwae Yai rivers (Noi = small,Yai = big) where they become the Mae Khlong river which flows into the Gulf of Thailand at Samut Songkhram.

Two trains depart for Kanchanaburi every day from Thonburi Railway station with special excursion trains from Hua Lamphong at weekends. The trip takes almost 3 hours and is not particularly memorable; as Thonburi station is not easily accessible, many travellers take the bus (about 100 baht and 2 hours) from the Southern Bus Terminal. The special train below, however, only seems to back and forwards across Bridge 277 on special days.

Song Thaews abound at the Bus station and the Central and River Kwai Bridge railway stations. Most of the hotels, restaurants, travel agents and car-hire places are by the river: within that area, most places are walkable, but Song Thaews also cruise up and down. Motorcycles and bicycles can be hired relatively cheaply.

For thousands of years, the Kwae valley has been a route for traders, invaders and missionaries between the Gulf of Martaban, modern Burma, and the central Plains of Thailand. By this route, between the high Dawna Range to the North and the Bilauktaung Range to the West and South, caravans travelled from India to the states of South East Asia. Also by this route came the Buddhist religion, first in its Theravada form, later in its Mahayana variety.

And of course it has also been the preferred route for Mon, Burman and Thai armies. In 1549 and 1592, for instance, Burmese armies crossed into Thailand via Kanchanaburi, besieged the capital Ayutthaya and were eventually repelled by fierce Thai Resistance.

In 1767, however, a three pronged invasion from the Three Pagodas Pass in the West, Chiang Mai in the North, and Chumphon in the South overran Ayutthaya, and razed it to the ground. From that event modern Thailand was born.

Early Kings of the Bangkok dynasty later invaded Burma in the reverse direction, but with no long-term success, and the Thai-Burmese wars eventually died out with the annexation of Burma by the British in the mid nineteenth century.

In the 1549 Burmese invasion, the Royal Chronicles of Ayutthaya relate that the king of Hamsavarti (the Mon name for Pegu - modern Bago, near Rangoon) led his army from Martaban, a journey of seven days, through Kanchanaburi, and eventually set up a stockade outside Ayutthaya.

As king Chakkraphat of Ayuthaya made his preparations for battle, Queen Suriyothai, his Chief Queen, dressed herself as the Uparat [second king], and mounted a huge male war elephant (its name is recorded as Song Suryia Kasat), fully equipped for battle, with Mahout and long-bladed axe warrior. 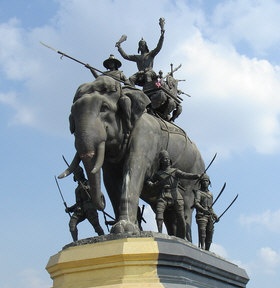 Queen Suriyothai Monument, Ayutthaya
At the height of the battle, seeing that her husband had become isolated from his troops, the Queen led a foray against the threatening forces, but was cut down by the King of Phrae, one of the opposing nobles. King Chakkraphat escaped the battle, but the Queen had been mortally wounded. Her sons Prince (later king) Ramesuan and Prince Rahin forced their way through to her body and bore it from the field. (The Royal Chronicles of Ayutthaya, pp 32-33).

Queen Suriyothai is still remembered as one of Thailand's greatest heroines, celebrated most recently in the highly atmospheric Thai movie The Legend of Suriyothai, which was released in the USA in 2003.

The Japanese chose a different invasion route. At 2 A.M. on 8th of December 1941, Japanese forces operating out of the old French Indo China territories, landed at Surat Thani, Nakhon Sri Thammarat, Songkla and Patani on the Gulf of Thailand; a land invasion crossed from Cambodia at Aranya Prathet. From Thailand, the Japanese army swiftly overran Malaya and on 15th of February 1942, the British garrison at Singapore surrendered unconditionally.

During early 1942, Japanese forces occupied much of British Burma as far as The Indian border. In June 1942, in order to supply the war effort against India, the Japanese began construction of a railway from Bahn Pong (Thailand Southern Line) along the Kwae valley, and across the Three Pagodas Pass, connecting with the Burmese railway network at Thanbyuzayat.

About 60,000 allied P.O.W.'s and a much greater number of Malays and other Asians were used as forced labour. Most allied P.O.W.'s arrived in Thailand by train from Singapore: British and Australian military jammed 26 to a box car with rubber planters, traders and colonial administrators, for a journey that even today takes the best part of three days. From Bahn Pong they were marched up the valley of the Kwae Noi to the construction camps, where the real misery began.

Conditions were appalling: backbreaking work from dawn to dusk in very difficult terrain, tropical heat or monsoon rains, and always swarms of insects. Already suffering from malnutrition and exhaustion, thousands succumbed to Cholera, Dysentery, Cerebral Malaria and the the casual thuggery of their Japanese and Korean captors. It is estimated that over 100,000 Asians and more than 16,000 allied P.O.W.'s died during the construction.

Most of the original railway has by now been re-claimed by the jungle, much of the track re-cycled, but the first section from Bahn Pong to Nam Tok (about 115 km) re-opened in 1958. Other parts of the railway, such as Hellfire Pass, can be visited fairly easily from Kanchanaburi.

The best place from which to ride the Death Railway is the River Kwai Bridge Railway Station (for timetable see Thonburi Line). A rail trip from Bangkok takes an extra three hours and the scenery is not very interesting. On the excursion trains, air-conditioning is also available, but if you want to take photographs through the window, this is probably not a good option.

Beyond Kanchanaburi, however, the scenery is spectacular. The line crosses and re-crosses the river, sometimes slowing to a crawl in dangerous places like Wang Pho viaduct, and if you want to stop and explore, this is quite a good place to get off (at Tham Krasae Station). Once the train has departed, many people walk along the line by the cliff side, as can be seen in the photograph earlier in the page. At the station itself is a restaurant and a small market, and just down river is the Bahn Mae Rim resort. Make sure you do not miss the return train. 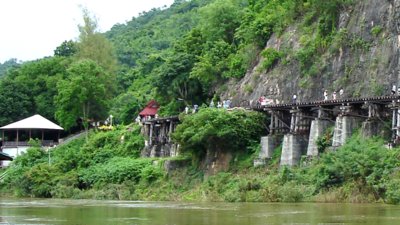 The Wang Pho Viaduct (from Bahn Rim Kwae)
Also at Tham Krasae, just by the station, is Krasae Cave. The cave houses several Buddha images and is a popular pilgrimage site for Thai people.

Muang Singh is an old Khmer site, dating from some time in the 9th to 13th centuries, most probably in the time of Jayarvarman VII (ca. 1181-1218). The site is located some 40km West of Kanchanaburi Town, on the banks of the Kwae Noi. It was probably of some importance, sitting as it does on the western border of the Khmer empire and on one of the main land routes from Burma to Thailand.

It was also once not as isolated as it is now. Mrs. Charuwan Phungtian (Thai-Cambodian Culture - Relationship through Arts) refers to another currently unexcavated Khmer site, Muang Krut a few kilometres east of Muang Singh.

Muang Singh is quite large (around 80 acres) with many beautiful old trees, but little remains of most of the buildings, except laterite foundation blocks. 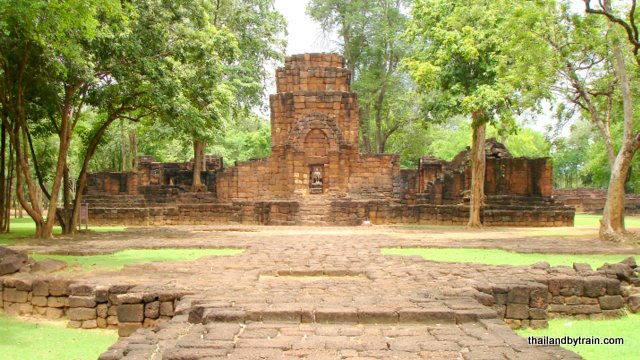 Muang Singh, Central Prasat
Near the small modern museum, a model of the site is laid out on the grass, showing that it was once a city of some size, roughly quadrilatral in shape, oriented N-S and E-W, with walls, ramparts and the added protection of a loop of the river to the south; a gate bisects each of the four boundary walls, and from each gate, a straight road leads to the central Prasat (a Khmer palace and shrine). 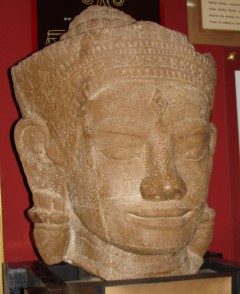 Shiva
The Prasat is better preserved than the rest of the site, a typical Khmer cruciform structure of laterite. Four doorways, one each side, lead to the inner shrine and to a statue of the Boddhisatva Avalokiteshvara - center of the Prasat, and of Muang Singh itself, a place much visited by Thais wishing to pay respect and to make merit.

The small museum houses some of the artefacts found in recent excavations: stone figures representing Hindu deities, such as Shiva, and Mahayana Buddhist figures such as Avalokiteshvara and Prajnaparamita. These suggest a late 12th century date for the site.

Nearby is the Bahn Kao Prehistoric Museum, also worth a visit.

Other Places to Visit 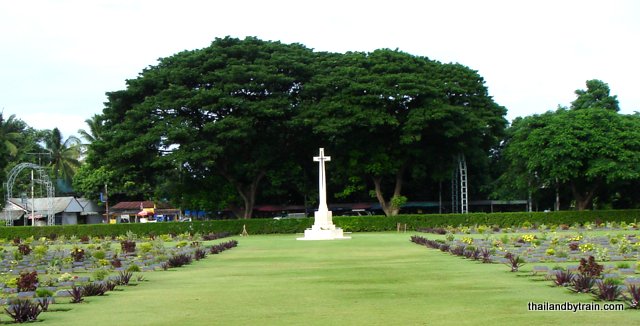 The main War cemetery is on Saengchuto Rd., not far from Kanchanaburi Railway Station. It is located near what was the site of the main POW transit camp. The cemetery contains the remains of more than 5000 Commonwealth and 1800 Dutch POWs, many of them in their early twenties. On the other side of the river, on the site of Chong Kai POW camp, is a second smaller cemetery. The location is about 2km south west of the town on Lin Chang Bahn Kao Rd.

The Jeath War Museum is located by the river on Song Kwai Rd., near Wat Chaichumphon Chana Songkhram. The building is a reconstruction of a thatched POW hut, with bamboo bunks. On the wall are photographs of POW living conditions and various memorabilia.

A private "Art Gallery and War Museum" is located just down river from the River Kwai Bridge. The main feature is a Japanese locomotive outside the main door, but the museum has quite a few interesting remnants of the war. Much of the museum, however, is given over to general Thailand memorabilia, including portraits of Kings and Prime Ministers. 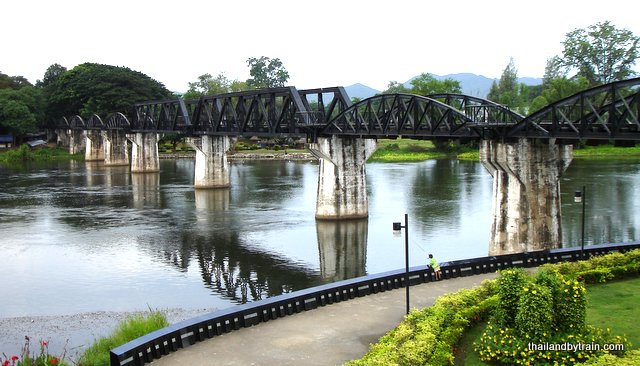 The infamous Bridge 277
At the north end of town is the famous River Kwai Bridge, known to the Japanese as Bridge 277 and still in use more than 60 years after World War II though with 2 spans replaced after the end of the war. As can be imagined, this is a great tourist attraction, especially at the times when the west-bound trains are due to crawl over the bridge.

The Railway station nearby is a good place to catch the train westwards towards the end of the line at Nam Tok. Nearby are several old Steam Locomotives and rolling stock. Kanchanburi Town Station, 1 km down the line has several more. 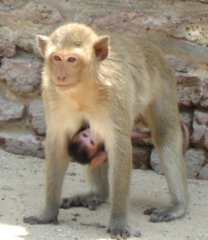 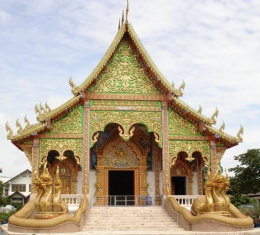 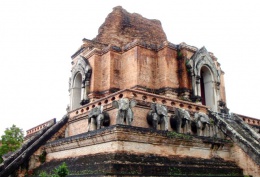