We need the builders again.


Did you hear the story of the man who attempted to change a light bulb and ended up needing a new ceiling? While changing the light, my wife noticed that the surrounding plaster board was beginning to separate, and she decided to cover it with a layer of concrete - heavy stuff concrete - from upstairs I heard a whoosh of debris and ran down to find kitchen, wife and cat, covered in rotten plaster board and tons of dust. The cat was particularly affronted by the indignity of it all and retired behind the furniture for the rest of the day.

Unfortunately the day was the first day of Thai New Year holiday (Songkran) which has been extended again this year by another day so we are unlikely to find a builder for a week or ten days as they disport themselves up-country.

However, resourceful as ever she, her sister and her niece covered the crumbling edges with tape to prevent further debris falling on the dining table and I suppose that will have to do. As the second photo shows, it doesn't look particularly convincing and I think we need to move the table a couple of yards southwards, especially when dining! 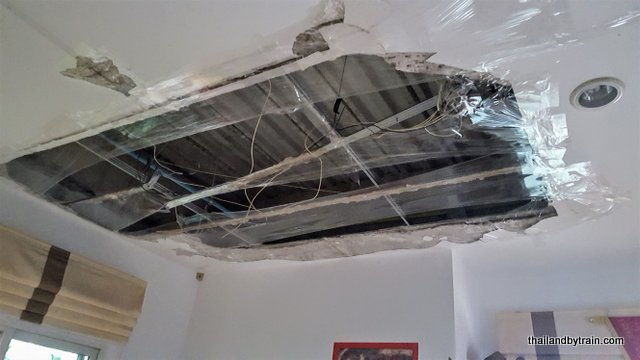 RELATED content
Thailand Floods 2011
The great floods of 2011 in Bangkok and Thailand, a web diary