Towards the end of the 19th century, many surveys were commissioned by the Siamese authorities and certain western interest groups and governments, with the object of bringing a railway system to Thailand.

One of the best known of these was the survey conducted by Holt S. Hallett, a British colonial administrator, whose object was to promote a railway line to take British goods from the Gulf of Martaban (Burma), through what was then Siam, to Southern China. His superb book: A Thousand Miles on an Elephant in the Shan States, first published in 1890 and still an excellent source of information on Northern Thailand, was the main result of this journey: the railway, alas, was never constructed.

Then in 1887-1888, Messrs Punchard and Co., British Railway Contractors, were commissioned by the Siamese government, to survey a line from Bangkok to Ayutthaya and then to Korat, the first section of the current North Eastern Line. James McCarthy, a British engineer employed by the government of Siam, describes some of this work in his book Surveying and Exploring in Siam, first published in 1900.

A second line was to go from Ayutthaya to Lopburi, then on to Lampang, Lamphun and Chiang Mai. From Chiang Mai it was projected to go north to Chiang Rai and eventually to Chiang Saen on the Mae Khong (Mekong river).

Much of this survey bore fruit, some years later, in the construction of parts of the northern and north-eastern lines though the section of the northern line beyond Chiang Mai has not been constructed, even to this day: the connection north to China via Chiang Saen and the Mae Khong, was very attractive from a trade point of view, but the engineering difficulties presented by the mountains of northern Thailand proved too daunting.

A recent (March 2010) proposal from the Chinese Government, however, for a high speed link between Asia and Europe might at last result the long overdue rail link from Thailand to Southern China.

The foundations for the current railway network were laid during the 1890's and the early years of the 20th Century. J. Antonio, a Portuguese photographer working for the Royal Railway Department in Bangkok during this period gave some details of these early years in his book: The 1904 Traveller's Guide to Bangkok and Siam.

According to Antonio, the first railway in Thailand was the Paknam railway; the accompanying map shows this line following the course of the present-day Rama IV road, from near Bangkok Central Station eastwards towards the mouth of the river. This line, opened in 1893, is no longer in existence, though Thai friends remember using it in the 1950's.

Antonio also mentions the construction of a private line from Thonburi to Tha Chin on the coast. This must be the Mae Khlong-Mahachai railway, now part of the State Railway of Thailand, though it does not connect with the main network.

This line is mainly used to ferry sea produce and passengers from the coast to Bangkok, but also provides the opportunity for a cheap and pleasant 1 day excursion from Bangkok to the old fishing ports of Samut Sakhon and Samut Songkhram: see the page Mahachai Railway.

In 1917, The two authorities were merged as the Royal State Railways of Siam, and in 1920 Narrow Gauge, for logistical reasons, was adopted as the national standard. Conversion work started by adding a third line to the Northern network so that it could run Standard and Narrow Gauge trains. Conversion of the network was completed in 1930.

Before the two authorities were merged the Northern and North-Eastern networks had been designed and run by German engineers, the Southern Line by British engineers. Once the two authorities were merged it was reasonably easy to run the two networks as separate enterprises, as at no point did the networks connect. This all changed with the decision to Bridge the Chao Phraya river at Bang Sue so that the Southern line could join up with the other networks. This meant that international traffic would be able to begin and terminate at Hua Lamphong Station in Central Bangkok, rather than on the other side of the River at Thonburi Station, which involved passengers in a rver crossing prior to departure. The Rama VI rail bridge, completed in 1927, was one of the first bridges accross the Chao Phraya river.

Early Steam Engines and carriages take up much of the space (as one might expect!), but one of the more interesting exhibits is a model train, a replica of the one presented to King Rama IV by Queen Victoria in 1856. The original occupies a prime position in the National Museum, Bangkok. 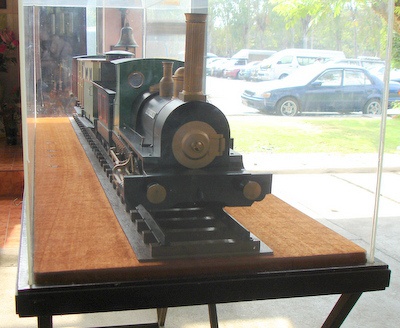 It is open on Saturdays and Sundays; entrance is free, though donations are always welcome.

Thailand's railways are littered with relics of the steam age - old locomotives and rolling stock, signalling equipment, message boards, maps etc. Most major, and some smaller, stations have steam locomotives, some in pretty good condition. 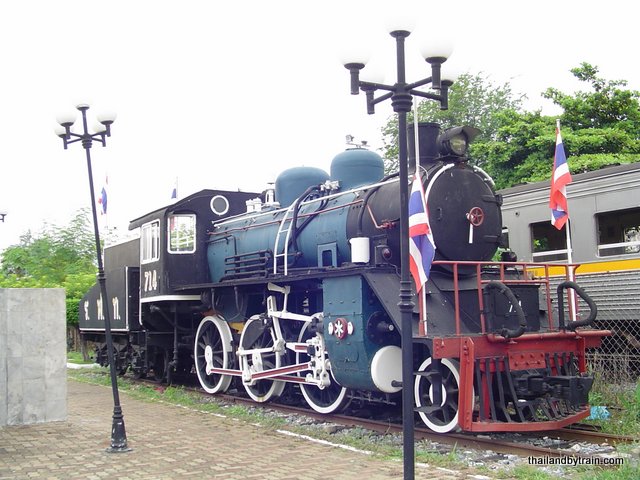 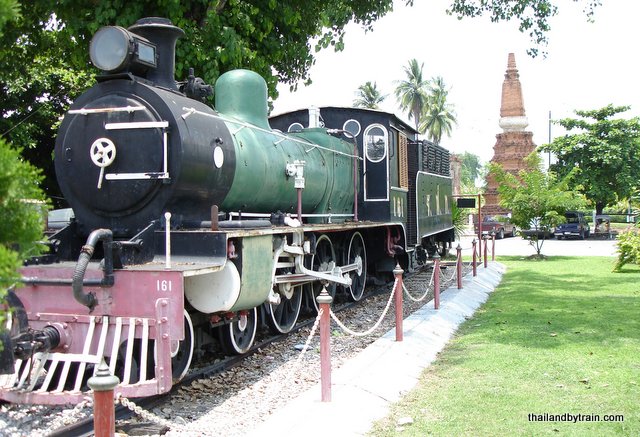 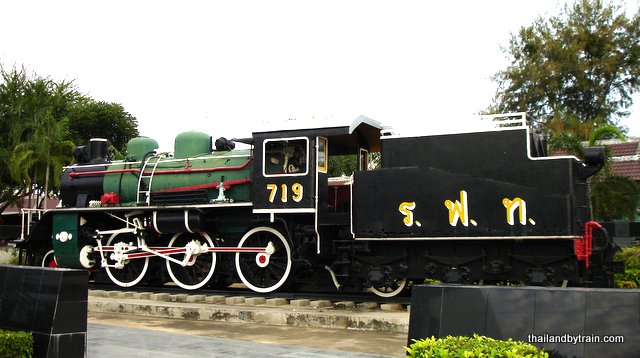 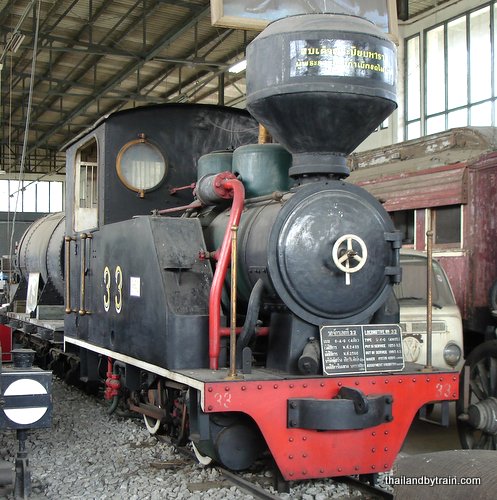 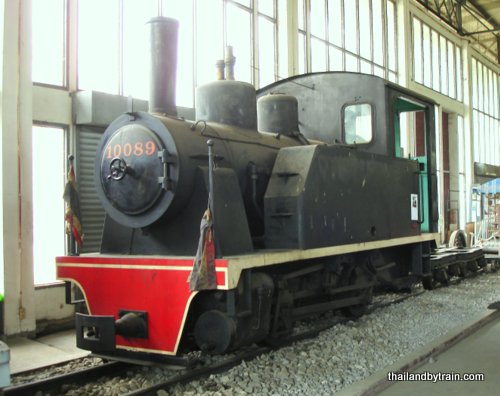 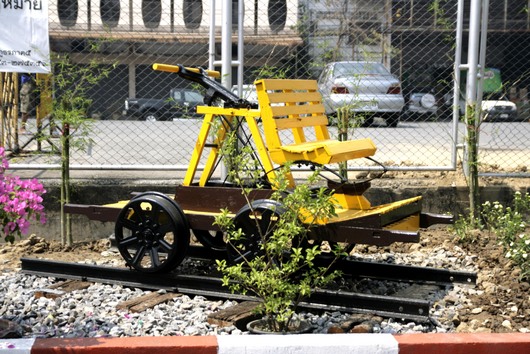 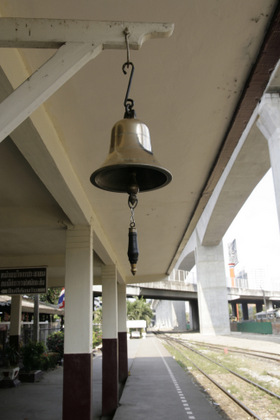 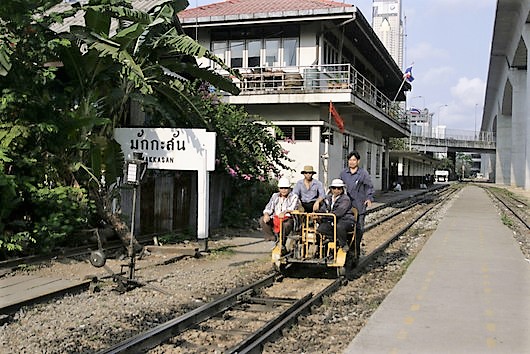 RELATED content
Useful Links
Airlines, bus stations, embassies in Bangkok.Sources
Historical and other sources for many of the pages on Thailand By TrainBikes On Trains

The late, and much lamented, Dan White, travel writer and photo-journalist, explains how to get your bike on a Thai train. The Borders of Thailand